Among the Best-known Business Schools in Europe

Presidents and deans from around the world have ranked the best-known business schools. BI Norwegian School of Management is ranked as the 25th best-known in Europe, and number 47 in the world. 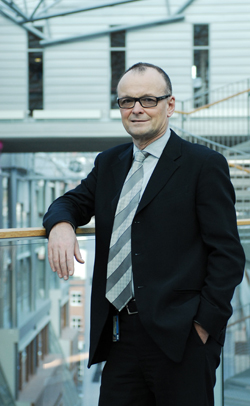 "This ranking is important because presidents and deans at one thousand selected business schools performed the ranking. They are informants with high competence in the field," says Tom Colbjørnsen, President of BI Norwegian School of Management.

In Norway, only BI Norwegian School of Management has achieved the top category ”Universal Business Schools with Major International Influence”, together with our Nordic neighbours, Copenhagen Business School and Stockholm Business School. These three Nordic business schools have received the top mark of 5.

"We are very pleased to be considered the 25th best-known business school in Europe. This shows that BI is highly visible abroad," says Colbjørnsen. "I am also proud that BI received top marks. Only 10 per cent of the business schools in the ranking received 5 palms.

From December 2009 to March 2010, presidents and deans at 1,000 selected schools were asked the following: "Which business school/s would you recommend to someone who wants to study in this country?" For Norway, the choice was between BI and NHH.

In total, 100 business schools around the world received EDUNIVERSAL'S top marks for the best-known business schools. All of the schools are characterized as higher education institutions with "significant international influence".

EDUNIVERSAL, which is part of French consulting firm SMBG (the leading French supplier of student guidance and HR) is responsible for the global charting, where one thousand presidents or deans around the world are asked to recommend higher education institutions in different countries.