New study: It's time to invest in Canada 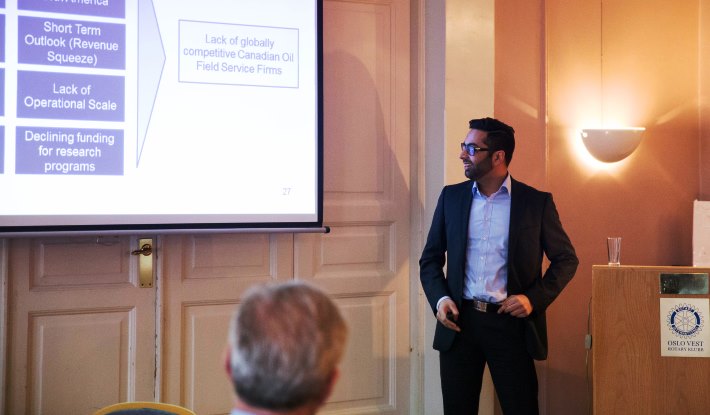 - The situation in Canada is characterised by a shortage of labour in the oil industry, while production is set to increase. If Canada is to address this in an effective manner, it may pay to take a closer look at Norway's success story, said Khanani during his presentation.

The focus of the seminar was how to address production increase while there is lack of access to capital, with a focus on providing a framework for the oil sector.

Khanani's conclusion is that although the outlook of Canada's oil industry is uncertain, this is a prime time for it to be open to change.

- This is the time to invest in Atlantic Canada, it's a gold mine. Establish operations now, instead of trying to enter the market later because the barriers to entry could be higher, encouraged Khanani.

A lesson in Norwegian Management

Khanani identified four main reasons for why Norway's approach may be the answer for Canada:

- The Norwegian oil fund has been managed very well, which has largely contributed to Norway's success in the oil industry. I look forward to reading Khanani's thesis and gain a greater understanding of how the Canadian oil industry can benefit from adopting similar approaches used in Norway, said the ambassador.

Khanani believes that the fall in oil prices will lead to increased investment in innovative technology for the Canadian oil industry. He also believes the decline will generate increased competition among smaller companies in the industry.

- Lack of access to capital in Canada remains, opening up a market need that Norwegian OFS firms are in the best position to fulfill.  This makes Atlantic Canada and attractive option for Norwegian offshore oil and gas investment, suggest Khanani.

Shell and BP have already invested one billion USD each into Canada's offshore activities. Khanani points out that the question is no longer whether they are going to find new oil, but rather when and how large this discovery will be.

The master thesis 'The Canadian and Norwegian oil clusters: A comparative study' is written in collaboration with fellow student Jie Li.