Philosopher and Associate Professor Øyvind Kvalnes has been presented with BI’s award for outstanding research communications 2015. He received the prize for his research and communication of ethics and philosophy at work. 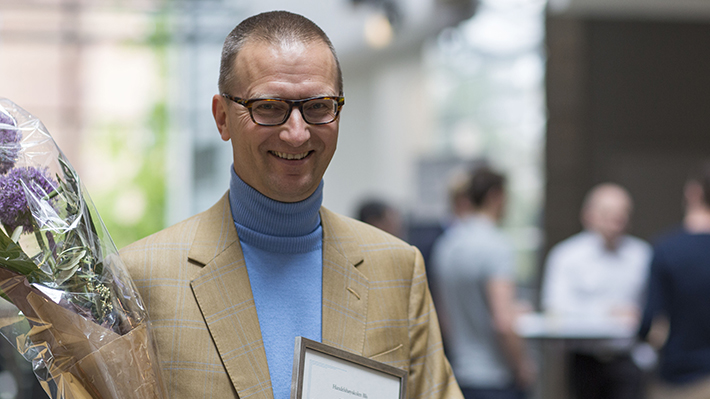 The winner researches, teaches and disseminates knowledge of ethics and philosophy as a resource at work - both for managers and employees.

– The field of ethics and philosophy in organizations is important for a business school. Interest in the area has increased sharply in recent years as a result of greater awareness in the media about irresponsible and unethical behaviour of leaders in both the private and public sectors, President Inge Jan Henjesand at BI Norwegian Business School said when presenting the award.

The jury wrote in its justification that Øyvind Kvalnes exudes great joy of communication and is open to trying out new genres and communication channels in digital and social media in addition to more traditional forms of communication. This width makes it possible to reach out to many different audiences.

"He has a special ability to use examples that people recognize as an input to present research-based insights about the dilemmas we face. The winner often uses current events in public debate to highlight his discipline”, the jury writes.

Øyvind Kvalnes is a guest commentator in both Dagens Næringsliv and Kapital and thus has the attention of leaders in the private and public sector. He has published several books aimed at different professions and to broad groups of the population. The winner holds between 30 and 40 lectures annually for different audiences and thrives in the ring. Participants are rarely allowed to be passive recipients. They are often challenged to take a position in difficult and practical dilemmas.

Through his research communication, both verbal and written through different channels, Kvalnes provides nourishment to healthy and important discussions at Norwegian workplaces.

The jury has emphasized the candidates' ability to maintain a dialogue with key stakeholders outside academia. This can be done in many different ways, such as through social media.

BI researcher Øyvind Kvalnes uses Twitter actively to discuss both subjects and other areas of interest.

The philosopher is a skilled and enthusiastic writer and has sent out more than 34,000 (!) messages on Twitter where he has more than 6,300 followers. This number is not matched by many other researchers. Many of his messages invite to debate and dialogue. Kvalnes also uses Twitter to test out ideas in on-going research projects and to acquire practical examples to illustrate the research topics. The candidate thus often puts himself in the crossfire and often gets answers to his statements.

This is a scientist who has also taken his work to the "movies." You can watch video lectures and dissemination movies with the winner both on YouTube and on BI’s digital communication magazine BI Business Review. The candidate also attempts his hand as a blogger, and experiments using podcast (audio) in his research communication.

The winner has in recent years published several scientific articles on key topics in ethics for managers in the workplace. The winner has shown a remarkable ability to take the knowledge of the scientific journals in a way that helps managers make better-founded decisions in difficult situations.