Forward-looking, innovative, adaptable. This year’s Karrieredagene at BI was a buzzing four days with an eye on the future of both BI students and the Norwegian labour market as a whole. 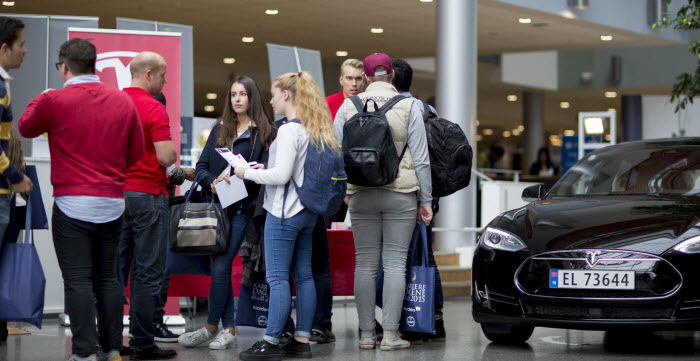 Tesla showing BI students how innovation drives success. Photo: Martin Uteng, BI. From Moods of Norway’s talk on innovation and risk-taking, to LinkedIn’s presentation of how digital networking is going to become increasingly intrinsic to job-seeking graduates, to Nordea’s focus on the post-oil era of Norway, the events at Karrieredagene 2015 had a touch of being adaptable to the unknown. Be prepared to meet the unknown

- The ability to adapt to unpredictable situations, and to be innovative with the package of skills you have to offer, are vital attributes for a graduate in today's labour market. It's a good idea to start early on training yourself to be flexible, so that when the time comes to look for a job, you're already prepared with alternative “back-up plans” when you meet the unknown, says Adriana Jansen, Careers Service at BI.

BI Careers Service enjoyed a record number of attendance at their CV day during Karrieredagene, where students queued up to gain hands-on feedback on their CVs. KDTV Rolling with change, Karrieredagene launched KDTV this year: a series of interviews with gamechanging leaders and inspiring role models who attended the fair.

Watch KDTV’s interview with Henrik Høst of Microsoft below. Aksel Husebø, manager of Karrieredagene, was pleased with the reponse to the new interview series.

- KDTV gives students a chance to see the speakers in a more social an informal setting. The project was a great success and we have gotten a lot of positive feedback from both students and employees at BI, says Husebø.

- We have reached the goals we set when starting the project in January, and we have also made important improvements to the project which has great potential for next year's committee. I believe the most important aspect of Karrieredagene is the fair. Students can literally pick and choose between a wide spectre of companies in many different industries, concludes Husebø.

As with every year, Karrieredagene 2015 was an important event for both experience-seeking students and companies looking to showcase themselves. In addition to the company lectures, 92 companies attended the Career Fair Day, where students were able to talk one-on-one with company representatives and start building relationships with their potential future employers.