Tennis balls in the classroom

How can you create interaction and involvement in a class of more than 600 students? Nina Ronæs of BI, or "Nina with the ball," has the answer. 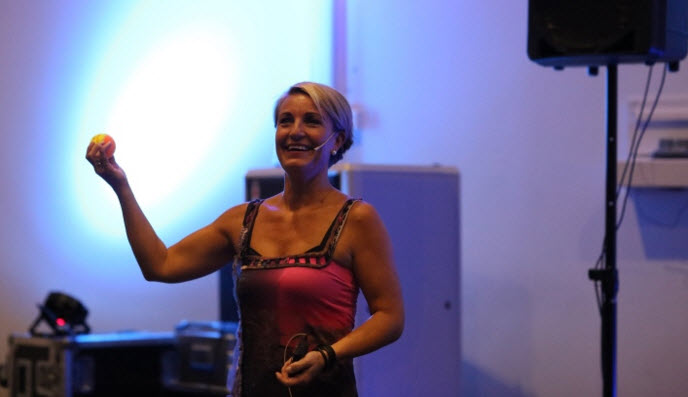 - I think the combination of activity and accountability provides a good dynamic in class, says Ronæs.

The popular BI lecturer has for 18 years used a tennis ball that acts as a discussion simulator in her lectures. She has tested, refined and changed ways of using for ball for interacting with their students for several years. The feedback she gets shows exclusively that it works. Students state that they remember what they say far better when they have the ball, versus those times they speak without the ball.

- After a group discussion on a given topic, I throw the ball to one of the students and ask them to sum upwhat the group has discussed, explains Ronæs.

- When the student catches it, something happens, both mentally and physically. It is said that if you hold onto fabric or cloth material, your concentration and focus increases. It can be that simple, said the enthusiastic teacher.

- The tennis ball is my trick to creating commitment. I am, after all, in competition with everything from students daydreaming to Facebook, Instagram and Snapchat. To be able to transfer knowledge I MUST grab the students' attention. There is no way around it, says Ronæs.

Don't dare to show up unprepared

She believes students learn better through active exchange of experience, and that they then get some pegs on which to hang the theory on. One of the most noticeable differences between the hours with and without ball, is that students no longer dare to show up unprepared when they know the ball will be there.

- The tennis ball from Nina helps me be more involved and engaged in lectures, says Christine S. Endresen. 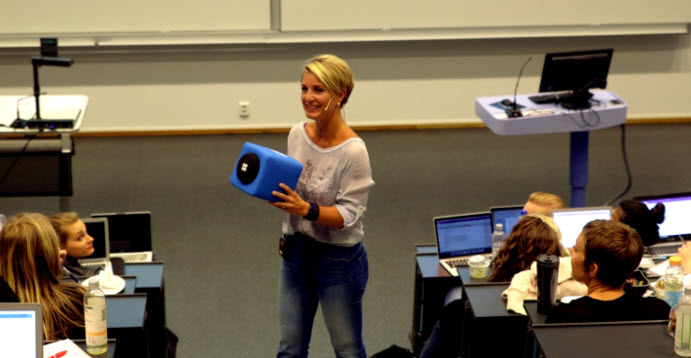 It had its advantages, but the tennis ball badly needed a technological overhaul. Therefore, the ball is now shelved and the new playmate "Catchbox" has been introduced.

- In a lecture hall with 350 students, it may be difficult to hear what is being said, both for me and the other students. This has been a problem, says Ronæs.

The green tennis ball has therefore been updated to what has been dubbed Catchbox. The ball is no longer round, it has become diamond-shaped, and a microphone is now inside the interaction tool.

- The students' expectations for technology is often greater than what is often delivered, but this time I surpassed student expectations. It's fun, says Ronæs.

BI is the first educational institution that makes use of a tool like Catchbox. Marketing Student Victor Franzén believes it almost should be a mandatory tool in all classes with a certain size.

- It makes me think outside the box and expands my comfort zone, says student Victor Franzén.