Budget preparation by top civil servants can allow for better balancing of public books after COVID.

The Coronavirus pandemic has caused an unprecedented economic downturn across all continents, and many governments in response have launched exceptional economic stimulus and fiscal rescue packages.

The combined total of such packages announced by G20 countries have been estimated to exceed €4.3 trillion ($4.7 trillion; £3.8 trillion). Together with the dramatic fall in tax revenues from reduced economic activity, this is set to push the average debt-to-GDP ratio of the world’s richest countries well over 130% according to recent calculations by the OECD.

In the longer term, such spectacular levels of budgetary deficits and government borrowing will require more stringent fiscal policies. We argue that delegation of the budget preparation process to top civil servants could facilitate this balancing of the books.

We reach this conclusion by analysing unusually rich data about the budgetary procedures and fiscal performance of Norwegian local governments over a 25-year period.

Municipalities in Norway employ one of three budgetary procedures, whose prevalence over time is depicted in the diagram below. First, there is the traditional ‘bottom-up’ procedure used in most countries around the world. This allows government agencies and standing committees to articulate their preferred spending needs, which then form the basis for political debates that fix the overall spending level.

Second, there is the ‘centralized’ political procedure. In this framework, key elected politicians fix the overall spending level first, and program allocations are decided afterwards.

Finally, an ‘administrative’ procedure exists where responsibility for preparing a coherent budget proposal is assigned to a high-ranked administrative official. She is awarded the full budgetary initiative and presents a draft budget with sectoral spending limits to the local council committees, which can make additional recommendations. 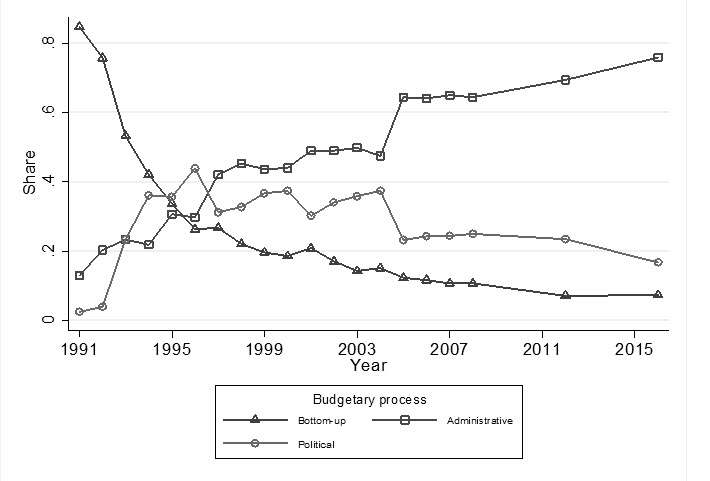 As displayed in the diagram, local governments in Norway have made substantial changes in their budgetary processes over time. Bottom-up processes saw a continuous decline starting from a very high level in the 1990s. Centralized political control became more popular up to the mid-1990s, but has lost much ground again in the 2000s.

Very few local authorities applied the administrative process at the start of the period under analysis, while nearly 80% currently delegate the budgetary initiative to a top official in the local administration. This substantial variation in budgetary procedures across time and space is ideal to assess how such institutional characteristics affect governments’ (lack of) fiscal discipline.

Comparing the fiscal situation in municipalities before and after they introduce administrative delegation in their budgetary procedures, we discover a striking improvement in their fiscal situation.

Compared to procedures relying on political coordination or the traditional ‘bottom-up’ procedure, deficits are approximately 0.3 percentage points lower on average under administrative delegation. This is a very significant improvement keeping in mind long-term budgetary surplus requirements of 3 percentage points at the local government level in Norway – or the 3% deficit rule at the heart of the EU’s Stability and Growth Pact (SGP).

Further analysis indicates that the majority of this improvement in fiscal performance is due to keeping spending under control. This suggests that administrative delegation allows the implementation of a stricter cost-control regime.

First of all, civil servants can control the type and nature of information reaching elected politicians and the public. She can thus exploit her informational advantage to achieve better fiscal outcomes.

Furthermore, delegation might weaken the many (political) voices speaking in favor of increased spending, and could “anchor” the subsequent political debate. This benefits stricter control over budgetary decisions.

A final key element is the administrator in charge should be held directly accountable for fiscal performance. This creates strong incentives towards sustainable fiscal policies even in a setting where the administrator might not have the last word in the budget (as is the case in Norway).

It has no significant effect in majority situations. The results thus indicate that administrative delegation in budgetary processes may constitute a particularly important tool to alleviate poor fiscal performance under ‘weak’ minority governments.

The coming years and decades will involve a painful return to fiscal stringency, and governments’ budgetary institutions should be designed accordingly. The experiences of Norway-style budgetary delegation offers an important impetus to these considerations, and, the research findings ought to be particularly useful for weak government striving to meet the requirements of post-Corona fiscal sustainability.

This text was first published on the LSE blog: https://blogs.lse.ac.uk/covid19/2020/06/04/can-post-corona-fiscal-discipline-be-sustained-top-civil-servants-can-make-it-happen/