In a recent paper (Ter Ellen et al. 2020), we develop a novel method to identify narrative monetary policy surprises using textual data on central bank communication and news media, and use it to study the news media transmission channel of monetary policy. In contrast to related research, our method does not require the public to read news with the purpose of acquiring information about the central bank or its policies explicitly. Rather, it captures transmission through news articles on topics that are important for monetary policy – inflation, labour market developments, the exchange rate, the oil market, financial stability, and uncertainty. Since such narratives are key ingredients in any interest rate decision and important for households (e.g. Larsen et al. 2020), central bank communication has the potential to affect media coverage, and thus expectations, even if households know little about monetary policy per se.

Combining methods from the natural language processing (NLP) literature with the factor identification scheme proposed by Bai and Ng (2010), we obtain six ‘topic factors’ from central bank communication, as well as from the news media prior to and after central bank announcements. The methodology we propose is general, while the economic application uses data specific to Norway. The time series of topic factors that emerge from media and central bank communication can be seen in Figure 2, alongside key macroeconomic aggregates for the Norwegian economy. Overall, the factors reflect the conventional narrative held about economic developments over the last two decades. For example, the estimates suggest that the media focused more on unemployment related issues around 2003, 2009, and 2015, which are periods associated with downturns, or recessions, in the Norwegian economy. Likewise, the enhanced focus on exchange rates and inflation during the earlier parts of the sample, relative to the latter part, is natural given that Norges Bank formally moved from a fixed exchange rate regime to inflation targeting in 2001. 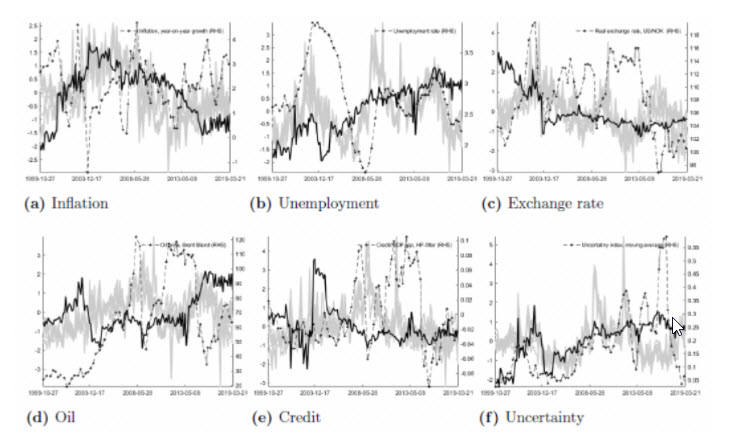 Note: Figures a-f report, in grey and dotted black, the factors estimated from the news media dataset as well as key macroeconomic aggregates for the Norwegian economy. The narrative central bank factors are reported in black. The frequency on the x-axis is event dates and the quarterly observable variables are mapped to this frequency using the first event date in the quarter.

Conceptually, our identification of narrative monetary policy surprises informally builds on the mechanism proposed in Nimark and Pitschner (2019) where no agent (i.e. household) has the resources to monitor all events that are potentially relevant for their decision, and thereby delegate their information choice to specialised news providers. We assume households have certain beliefs about macroeconomic conditions, and that such beliefs might be affected by central bank communication that reaches the public through the media if it is newsworthy. Then, narrative monetary policy surprises are identified as the differences in narrative focus between the media and the central bank's communication along the dimensions of the aforementioned topics.

Using interest rate market data and the high-frequency identification framework pioneered by Gurkaynak et al. (2005) to identify what we label as conventional monetary policy surprises, we find that there is a weak and insignificant relationship between these surprise measures and the proposed narrative surprises. Hence, the narrative surprises identified here capture a different part of the central bank's communication than conventional monetary policy surprises do – and suggest that the media channel might be complementary to the transmission mechanism traditionally studied. 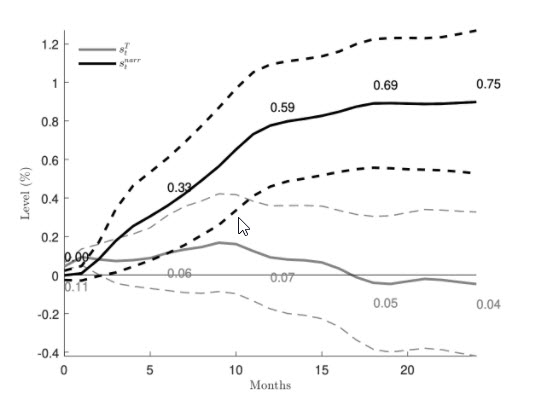 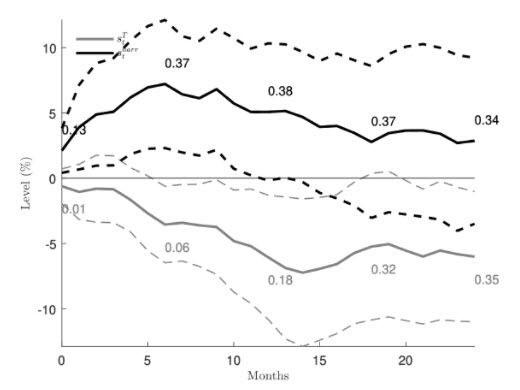 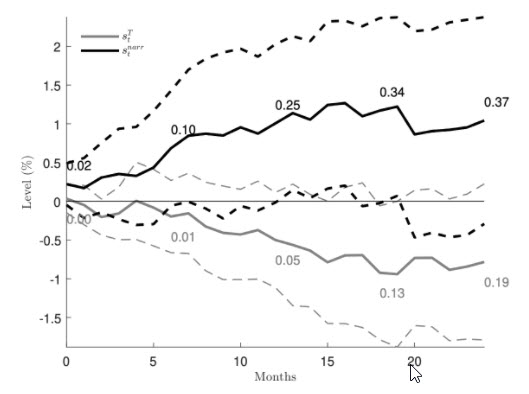 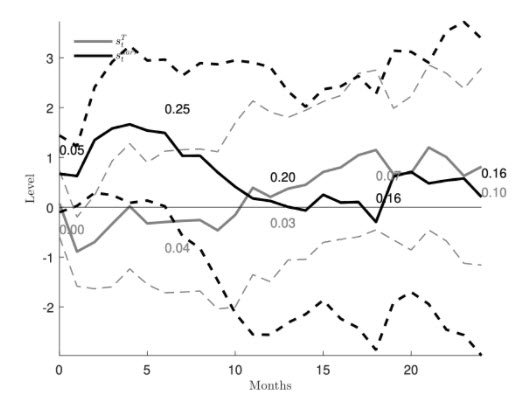 Can central banks communicate with the general public?

Blinder (2018) is not very optimistic about central banks’ ability to reach the general public, writing that “[c]entral banks will keep trying to communicate with the general public, as they should. But for the most part, they will fail”. However, there seems to be light at the end of the tunnel. Bholat et al. (2019) show that making communication relatable to people’s life enhances the public’s understanding of central bank statements. This emphasises the importance for central bank communication to focus on the inputs to monetary policy decisions, such as employment conditions and prices, rather than the monetary policy tools itself. After all, households have very little affiliation with the key policy rate or its projections, but face consumption decisions on a daily basis. As Haldane and McMahon (2018) put it, “the main policy implication is that, while more still needs to be done, there are compelling reasons for central banks to continue trying [to communicate with the general public]”. Our study suggests that central banks indeed should not give up, as their statements, be it indirectly, reach their audience.

Authors’ note: The views expressed here are those of the authors and do not necessarily represent those of the institutions with which they are affiliated.

Blinder, A, M Ehrmann, M Fratzscher, J de Haan, and D J Jansen (2008), “What we know and what we would like to know about central bank communication”, VoxEU.org, 15 May.

Blinder, A (2018), “Central bank communications. Through a crystal ball darkly: the future of monetary policy communication”, AEA Papers and Proceedings, 108, 567-571.

Cieslak, A, and A Schrimpf (2018), “Monetary and non-monetary news in central bank communication”, VoxEU column, 22 October.

Jarocinski, M, and P Karadi (2018), “The transmission of policy and economic news in the announcements of the US Federal Reserve”, VoxEU.org, 03 October.