MY FIRST WORKING EXPERIENCE IN NORWAY

I started working in Norway in January 2019. I am on my first year of the master program. I was not expecting to start working so soon after coming to Norway.

I started working in Norway in January 2019. I am on my first year of the master program. I was not expecting to start working so soon after coming to Norway, because I was mostly focusing on studies. Also I thought that finding a job without fluency in Norwegian language would be impossible. But everything happened unpredictably – the CEO of that company had a guest lecturer at BI. I was amazed by the service which the company was providing, so I talked to him during the break. I said that I would like to introduce his company to my previous employer in Russia. This is because they would really need such a service. So, we started communicating and that was how I received an offer in October. Even though I was not planning to do so, I decided to give it a try.

Before I came to Norway, I had a working experience in two big international companies with more than 1500 employees. I was really intrigued to know how it is to work in a small company. With 6 full-time and 10 part-time employees, which is, as I was told, quite typical for Norway. And I am amazed every day! 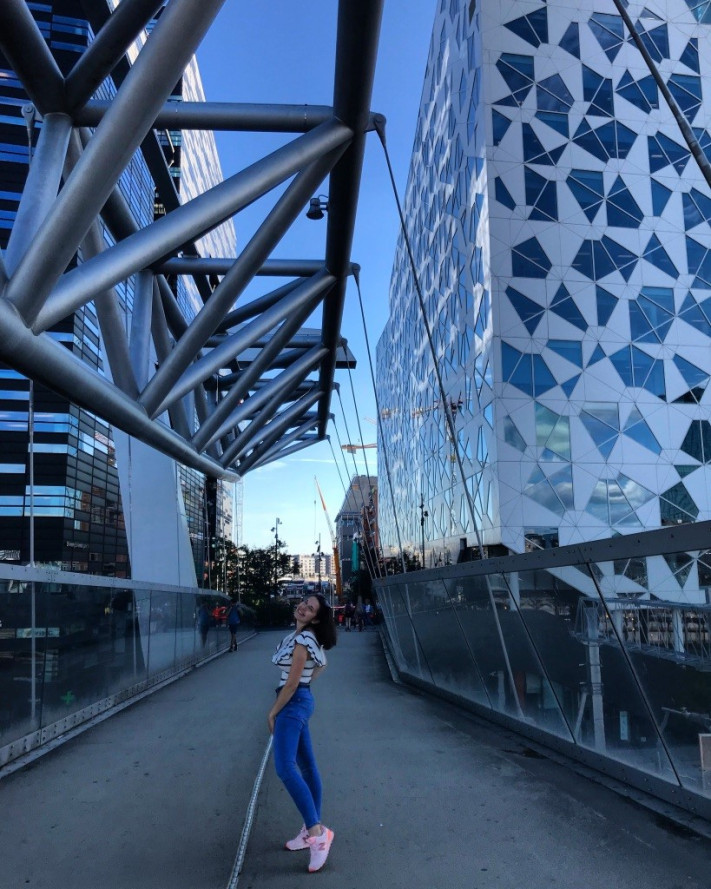 The company is super-fast and efficient. My colleagues usually say “What big companies are doing for 2 months, we are doing for 3 hours. And better”. It is very challenging, since we are so few, but the company is global. We are working with the most well-known brands and companies in several countries. Furthermore, because of the fact that we are so few people, we do not have “fixed” roles. – For example, I am mostly doing analytics and preparing deliverables and solutions for clients. Also, developing the new approach through R-studio, soon will be presenting the reports during client meetings. We will also start negotiations with several companies in Russia to offer them our services. A lot to do. But this is why I like it.

Also, what I really love about this new experience, is that the atmosphere is very informal, friendly, funny and caring. We are working hard but never forget about the social part as well. It is not typical for me. The distance and the level of formality in big companies were much higher in Russia. Even though both companies I’ve been working for were international.

What I also found very different, was working hours. In my country, it is mandatory to be at the office from 9 to 18. While here in Norway people on average prefer to start working early in the morning and finish at around 15-16. However, my colleagues are mostly working from home. Rarely anybody comes earlier than 11. I am usually the one to open the office door at 9.

Summing it up, I would say that I am very happy to have such an experience in Norway. – I am opening something new to myself every day. I am challenging myself every day, and enjoying every day. Even though it is tough to combine job and studies.

Getting my dream internship

During the third semester of my Master of Science studies I could choose between going on exchange, ...
Internship and job opportunities

How to ace that nerve wrecking interview

It’s that time of the year when the days are short, the weather is miserable, and many of us are eag...
Internship and job opportunities

How to find a job in Norway - Advice from a professional

When people come to Norway, they have very different rationales why they are searching for a job. I ...
Internship and job opportunities

Finding an internship in a new country, where you don’t have a network of connections and barely kno...