Dare we tell on the boss?

How do employees behave when their own managers are working against them? Do they dare to speak out, or do they let the problem continue? These are questions Jon Emil Tanum Dahl and Victoria Iselin Svendsen addressed in their master thesis.

Under the heading "Would rather quit than tell on the boss" Dagens Næringsliv tells about the findings of the interesting master thesis on destructive leadership by BI students Tanum Dahl and Svendsen. Read the article about the master thesis here. (In Norwegian behind paywall). 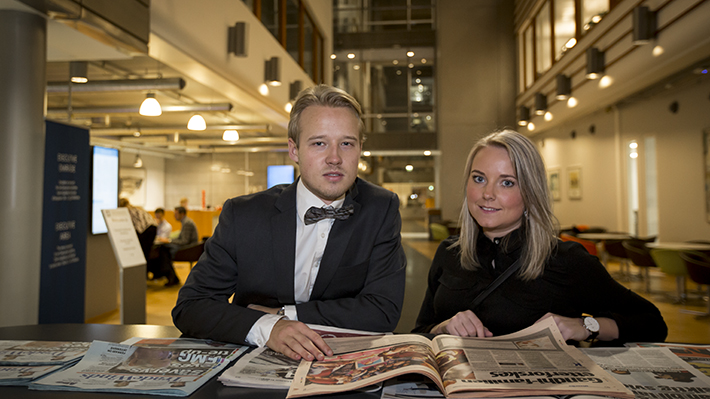 Studies also show negative consequences for those who have been victims of destructive leadership. Victims of long-term harassment experienced demotivation and dissatisfaction with their work, insecurity and fear, decreased self-esteem, or even physical diseases. Further, these victims showed no commitment to the organisation or themselves, avoided contact with their leader, and engaged in destructive social behaviour like bullying

Tanum Dahl and Svendsen, who were on the MSc programme of Leadership and Organizational Psychology, wanted to find the answer to how people really react in a workplace they do not thrive in. How do employees react to a destructive manager?

- What surprised us most about the findings is how little people do react. Our survey shows that respondents had a great tendency to rely on a passive response, i.e. victims aim to stay away from the manager, instead of confronting the manager directly, says Tanum Dahl.

The study showed that an important reason as to why victims do not dare face confrontation and instead rely on passive responses, is because of the power difference and fear of further repercussions. Most respondents used self-focused strategies (rather than leader-directed), which results in evasion and denial, or social support through talking with others, rather than to confront their managers. Those who actually chose to confront them often faced worse consequences from managers.

- Something that also amazed us was that the employees mostly encouraged others to do the exact opposite of what they themselves are doing. Although the majority of respondents said they did not confront destructive managers, they recommend others struggling with the same issue to actually confront them, says Svendsen.

Several respondents concluded that there should be better, more visible warning systems in organisations.

- It is not effective enough with a warning system if it is not well implemented and visible to the employees, says Tanum Dahl.

There should also be stricter procedures when hiring managers. Respondents argued that their managers behaved destructively because of a lack of knowledge and because they were employed on the basis of seniority or coincidences.

- As a final thought, the study also shows that six of ten survey respondents quit their job as a result of the manager's destructive actions. It shows that their reaction is thus not effective in changing destructive management, says Svendsen.

Destructive management:
The systematic and repeated behaviour by a leader, supervisor or manager that violates the legitimate interest of the organisation by undermining and/or sabotaging the organisation’s goals, tasks, resources, an effectiveness and/or the motivation, well-being or job satisfaction of subordinates. (Definition of Einarsen, Aasland and Skogstad, 2007)