Fell in love with Norway

Frederik (27) is not planning to become CEO in ten years, but if he continues climbing the career ladder at the same pace as today, he very well might be.

It is a grey and sullen morning when we meet BI alumnus Frederik Hanses in Yara International's newly renovated headquarters at Skøyen. Around 300 people from 29 different nations work here. - It really is an international business environment, you can hear so many different languages ​​when you walk in the corridors, says Hanses. 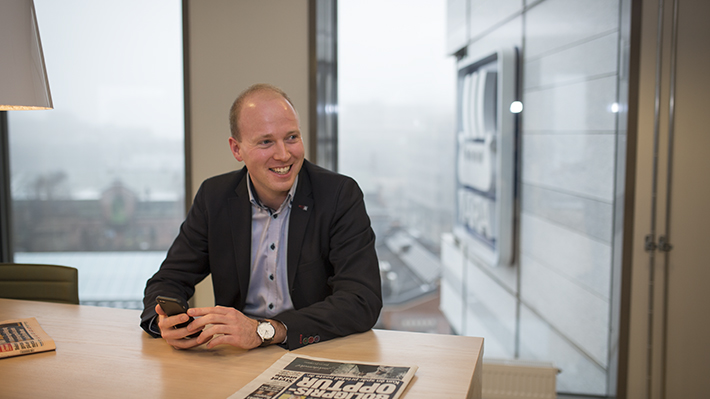 Despite his relatively young age, Hanses has built an impressive resume. During 2015 he was promoted twice, and is currently one of Yara's youngest project managers, responsible for a team of nearly 30 people located in several countries.

Hanses moved to Norway for the first time as an exchange student at BI for a bachelor programme in 2010. He was born and raised in Bramsche in Germany, and lived in the Netherlands during his bachelor studies, before he decided to come back to BI to take his master’s degree in 2012.

- I love Oslo, I see it as a big village. Although it is the capital, you can walk everywhere in the city. I like that in summer you can go to the sea and in the winter you can just go skiing. I've become quite Norwegian in some ways and I love going to the cabin for the weekend, says the German laughing.

- My ambition has never been to become CEO within ten years. It has rather been about delivering the best possible results from the place I am. I want to be good at what I actually do, says Hanses.

- The most important thing is to have fun. Enjoy what you are doing at the place you are, and not chase.

When he first began at Yara, almost two years ago, most his colleagues were about twice as old as him. - Many have 30 to 40 years of work experience, and they know absolutely everything! When you work in this kind of environment, it is essential that it does not scare you, and rather focus on how you can benefit from their experience. 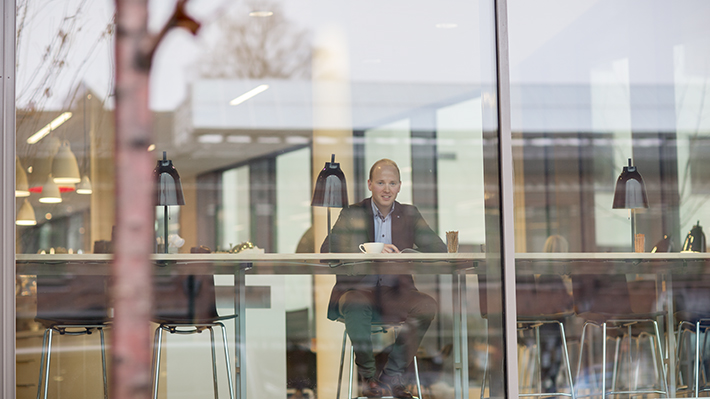 He adds that Yara is not known to employ a large cohort of graduates, which made the 27-year-old extra proud when they dared to bet on him. Career-wise, Hanses sees it as a great advantage to work with experienced colleagues.

- People in their fifties and sixties have different ambitions. They do not show themselves off to prove what they are good for, which in turn allows them to give me more responsibility.

Although the German loves Oslo and the Norwegian mountains and fjords, there was no guarantee that he would stay after his graduating.

- An important criteria for me was whether I would feel comfortable with the business culture. The Scandinavian business culture is unique, says Hanses. He experienced this first-hand during his summer internship in the communications department at Statoil during his master studies. Previously he has worked for the French L’Oréal in Dusseldorf, and the shift from there to Norwegian business culture was great.

- In general there is a very flat organisational structure here. I remember my boss in Statoil liked a report I had written and wanted me to present it to the management. In Germany, that would never have happened. I would have given the report to my boss, who would then present it to the management. One of the things I like about the Norwegian culture is that you are more responsible for what you deliver, explains Hanses. 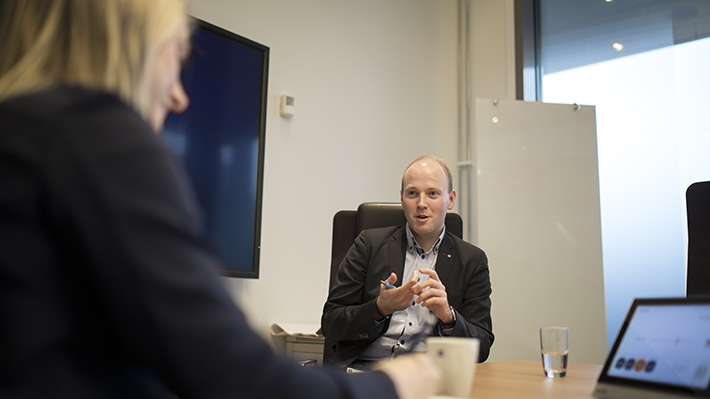 It was after working in Statoil that Hanses realised he liked the Norwegian business culture and began to look for jobs in Oslo.

- I wanted to work in an international company. We had a case on Yara in one of our classes, which made me interested in the company. I started looking at their website and found a job opening as a sourcing analyst.

The project Hanses leads is based in Brussels, which means he travels a lot.

- I'm the only person on the project who is based in Norway. The team operates from Brussels, which means I’m usually there around three days a week. My manager is based in Helsinki, and the team members are from Belgium, Netherlands, France, Finland, India and Morocco. It does happen on occasion that we get some culture clashes, he says with a smile.

Hanses is fond of travelling in his spare time as well. Over the past year he has been on holiday in the Caribbean, visited earlier study friends in Rio de Janeiro, and in addition, he travels home to Germany on occasion to visit his family.

Hanses took a Master of Science in International Management, where the classes consisted of nearly 40 percent international students. This gave him a good foundation for working in an intercultural team.

- In the first semester of my master's I had no idea what to expect. I had never used references before, I was not used to the research style of writing assignments as they used at BI. Working with new people and new groups all the time. After the first semester and I got my grades, I relaxed. I believe you do not necessarily need to study hard, but rather study smart. Focus on what you can do, rather than spending all your time on what you cannot. No one is good at everything, advises Hanses. 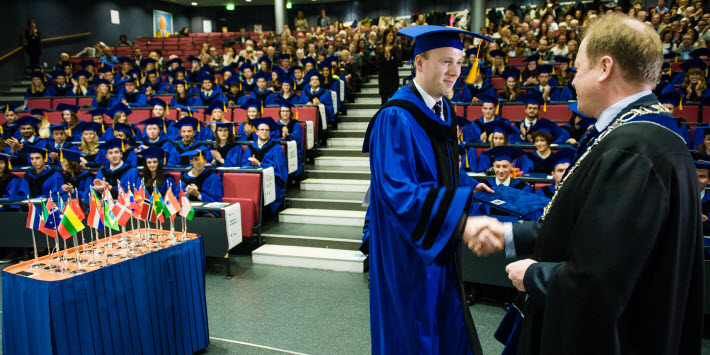 During his master studies, the German student learnt Norwegian well, which he believes is important if one wants to pursue a career here.

- Although the main working language is English here at Yara, it is an advantage to know Norwegian as all of small talk usually is in Norwegian. It is important to be a part of the casual work environment.

The path forward and up

The path forward and up for Hanses has not been paved by any magic recipe. He says that hard work from day one that has been a driving force for his success.

- When I got the job in Yara I was thrilled, but what surprised me a bit was that I had to begin immediately.

He was offered the job in January, when he still had six months left of his studies. Life was already fully booked with lectures, the master thesis and a part-time job as a student assistant.

- The plan became to write my thesis on weekends. This did not work well. My original plan was to finish the thesis in late May, but what happened was that I only really started properly on the thesis right before the end of May. Keeping on like that is not something I would recommend for anyone. Juggling a new job at Yara, the position as a student assistant and continuing to write my thesis, gave me no spare time. 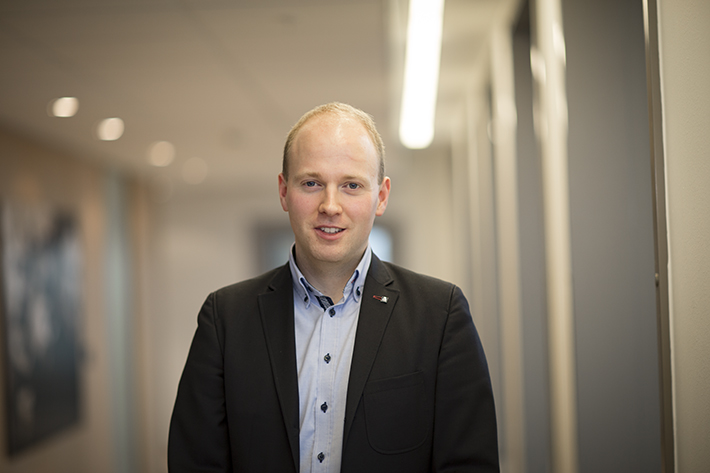 Fortunately, it went well: Hanses delivered his master thesis with brilliant results and got to concentrate on doing well at Yara. He points to the practical experience and interpersonal relationships as important factors in his steep climb on the career ladder.

- I think my previous internships have helped me to develop so quickly at Yara.

- My internships have taught me the soft skills, such as whom you should talk to and how to relate to different people in different positions, which in turn has accelerated my career growth.

- I was told once that when you choose your first job, you are also selecting your first boss. You spend more time with the people you work with than your closest friends and family, said the German who has only been home in Germany a couple of times over the past year.

- What I liked with my first manager was that he has always been a safety net for me. He has always supported me. Every time I did something good, he told me, so I knew that if he was silent I really messed up. This was something I liked because it gave me a guideline on how I was doing. At the same time, it was the verbal comments that really stuck, and they were positive and encouraging.

Promoted twice over the past year, Hanses says that this has happened much faster than he had expected. He says that this recognition has given him a belief in himself and what he does. Perhaps equally important is that he has also built up faith in the work Yara does.

- Everyone is working towards the same goal, everyone feels they are really contributing. In a few years there will be nine billion people on earth, and we contribute to food production for all these people and to combating world hunger.

(All pictures taken by Martin Uteng).