In 24 hours, student teams from BI, NHH and NTNU practiced as consultants in Bekk’s case competition. The client was Telenor Norge and the task was to secure a solid future customer base for Telenor.

In Finansavisen on Wednesday February 17th, a piece was published about students from BI that impressed CEO of Telenor Norge, Berit Svendsen, with their solution.

The assignment the students received referred to "Smart homes" and they focused on developing a solution or a product aimed primarily at homes, that would ensure Telenor a solid customer base in the future. The BI team, which consisted of Alexander Cornejo, Mergim Tahiraj, Andreas Stokka jr. and Besart Kurti as a competitive force in that they were four very different people. - We have deliberatly put together a not very homogeneous group, says Andreas Stokka jr. to Finansavisen.

The jury consisted of Telenor managers and management from Bekk Management Consulting. On the list of ideas and solutions were automated daily purchases, eHealth and security solutions. In the end, all three teams produced a security solution in their proposal. The winning team from BI recommended a security-focused platform, with various equipment packages aimed at different customer groups.

After the presentations, Berit Svendsen commented to Finansavisen that she believedTelenor had much to learn from the mindset of the students. - They respond very quickly, while Telenor enough has tended to be a bit slow, said Svendsen to Finansavisen.

The BI team received feedback from the jury that they performed the best consultant craftsmanship. The prize was twofold and consisted of a check for 25,000 kroner from Telenor, which would be donated to SOS-barnebyer, as well as a check of  25,000 which was allocated to the four students. 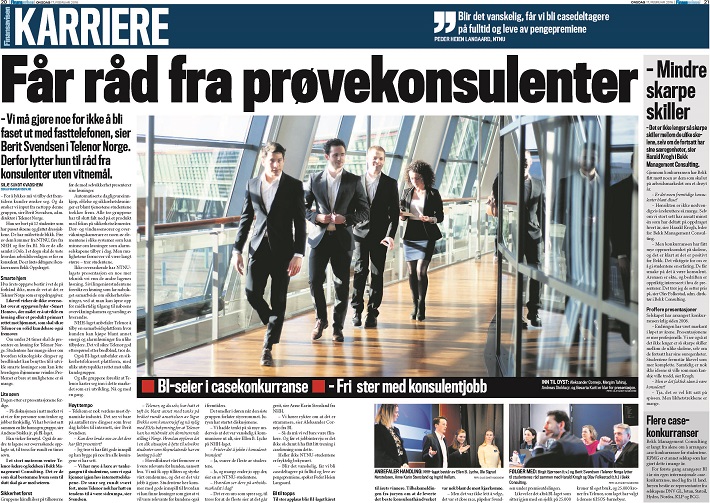