- It was a difficult case, it had a wide scope and we struggled to solve it. 10 hours into the competition we still had not found a proper solution, says a happy Stefan Igngatovic. He is proud of his team's participation in the case competition and revealed that this was the first case competition for several of the team.

- This is one of the hardest I've ever been in, but when I saw all the people here today, and their faces and jury, and when we realized we had managed to capture Hydro mentality, it was worth it, he grins.

Stefan and his teammates Anja, Andrja and Brainslav wore blue bowties during their presentation as a clear reference to the team name (Bowtie).

BI also participated with a team, but was unfortunately not to the final.

Powered by cases for 75 years

This is the first time BI had organised an international case competition. Cases, however, are not a new phenomenon at BI, as President Inge Jan Henjesand nodded to:

- The use of business cases in teaching is something we have done at BI since the school was founded almost 75 years ago. Our goal has been to bring the students as close to real business situations as possible.

He also used the occasion to thank delegates, sponsors, jury and team behind the implementation of the competition with lecturer Svein Lund and Project Marielle Solvang Nilsen spearheading.Royal presence

Her Royal Highness Crown Princess Mette Marit was present during the final competition.

- I hope this inspires you in your admirable efforts to strengthen young people, said the President to the Crown Princess in his speech. 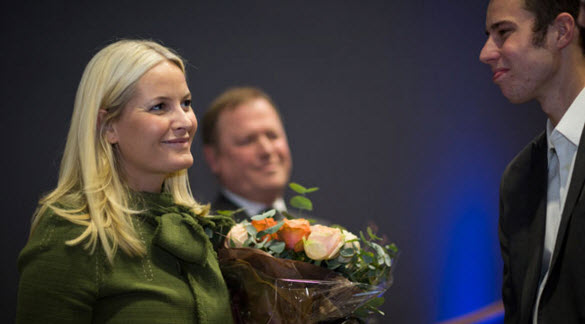 Hopefully the royal presence was an added inspiration for the finalists, who had 15 minutes at their disposal to present their case solution followed by 12 minutes of questions from the jury.

Impressed the jury and audience

- The winning team Bowtie presented their solution of "Recycle, Reduce and Renew" confidently and clearly, and gave convincing answers to the questions from the jury.

- There were themes all teams scored high on, he said before he announced the winning team which received a standing ovation by the audience.

While the jury discussed which team would claim the prize, the President had invited NHO Director Kristin Skogen Lund to speak. She held an inspiring lecture about "Leading through Change." Skogen Lund expressed that in times of great changes, such as economic recession, good management is more important than ever. She also pointed to several challenges we face in Norway, including the immigration crisis and rising unemployment, particularly among young people - a topic that has not previously been so much focus.

- The truth is that 71 000 Norwegians under 30 are without jobs and education. There is actually a whole generation of young people who do not take a productive part of society, she said, and believed that by creating jobs where these groups have the opportunity to learn, master and produce, then young people and refugees who come to Norway will get a meaningful way to support themselves and their family.

While the international teams have spent the week to work intensively with the case and experience Norwegian nature and culture, there has been a buzz around campus Oslo with talks and activities for all students. Full-time students have also been able to take on a case competition through BIBest. They got 24 hours in which to solve the same case study as contestants.

- 13 teams submitted a response. There were several who tried but some gave up, told Svein Lund.

The cases were evaluated by PhD students and four teams did present their case in front of a jury consisting of Tor Tangnes, Jannicke Rasmussen and Gorm Kune.

Aleksander Øgby and Petter Øst won the victory and a bag with great gifts from all partners of BIICC.